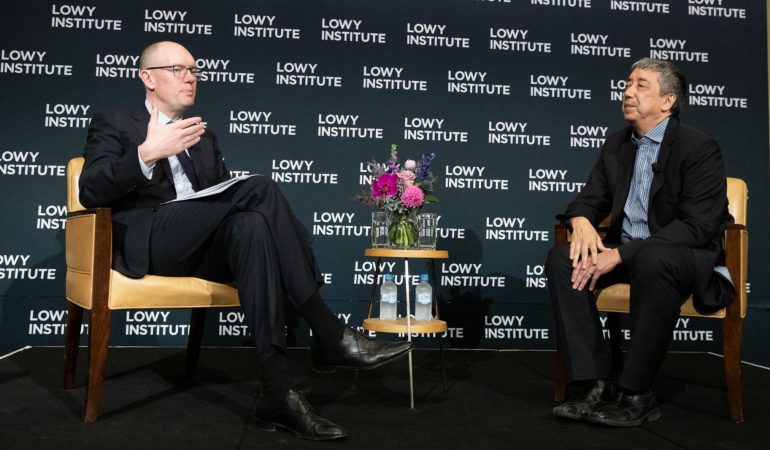 We were delighted to once again host our Moriah Foundation Lowy Institute Dinner with keynote speaker Dr Bobo Lo, in conversation with Lowy Institute Executive Director, Dr Michael Fullilove AM, discussing Russia’s invasion of Ukraine and its impact on global security.

Bobo is an award winning Chinese Australian writer and foreign policy expert. He served as a diplomat in Moscow, and was the Director of the Russian and China Program at the Centre for European Reform. He has written extensively of Russian and Chinese foreign policy and recently Bobo published a paper entitled Putin, Xi and the Russian Invasion of Ukraine, exploring the impact of Putin’s invasion of Ukraine on the Sino–Russian partnership.

In welcoming our guests, including our valued Foundation Members and Foundation Circle Members, Foundation President, Judy Lowy reflected on how much the world has changed in recent years, but “what hasn’t changed is our core mission at The Foundation, which is to assist as many families as possible to get a Moriah education and all the opportunities that come with it.”

Judy shared reflections from her recent visit to Warsaw and Ukraine, and the incredible support the Jewish Agency is providing to this war-torn region. “I felt such an overwhelming feeling of pride and admiration in seeing how Israel has responded to this terrible situation.”

In introducing Bobo and Michael, Judy spoke of the humanitarian crisis that the conflict has caused, with so many lives lost, millions of people displaced, economies devastated and global security under threat.

Michael Fullilove provided an overview of the huge challenges the Australian Government is facing including dealing with the new international disorder. “In Russia’s unprovoked, unjustified, brutal invasion of Ukraine, we have perhaps the biggest discontinuity in the international system since the Second World War.”

Responding to Michael’s question regarding why Russia invaded Ukraine, Bobo explained that Putin wants to crush the idea of a sovereign independent Ukraine, revise the post-cold war settlement in Europe and overturn any semblance of rules-based international order globally.

Bobo expressed his surprise at the weakness of Russia’s military. “We always knew that Putin’s Russia was a dysfunctional State… that it was a country without mates with the arguable exception of China. But most observers were surprised by just how dysfunctional the Russian military proved to be… All the signs were that they would win quickly, and they would win crushingly and decisively and we all underestimated the extraordinary bravery of the Ukraine’s and the extraordinary effectiveness of their resistance against a seemingly overwhelmingly odds.” Bobo shared that he was also surprised by the strength of Western unity, but questions how resilient the Western solidarity will be in the face of soaring inflation and other urgent priorities, particularly in light of Russia’s durability.

In looking at how the war could end, Bobo discussed four scenarios being that Putin loses, there is a stalemate/draw, Putin wins or there is an uncontrolled major escalation, such as unconventional warfare or the conflict extending beyond Ukraine. Bobo’s view is that if “Putin is not stopped now, he will need to be stopped later.”

In discussing Israel’s interest in this conflict Bobo noted that Israel is treading a thin line, trying to sustain a pragmatic relationship with Putin’s Russia so it doesn’t disrupt Israel’s security. On the other hand, Israel has a flourishing democracy and believes in civilized behaviour and most Israelis condemn the invasion. “Israel is trying to pursue a mediatory role. The problem is not with Israel. The problem is no one is ready to accept any type of mediation and Putin still thinks he can win by a knockout.”

In regard to China, Bobo shared that Beijing is upset about the reputational damage the war has caused to China, because of its intimate association with Russia, and is also upset that the conflict has unified the West. “The Chinese are trying to be as loud as possible about its support of Russia while doing as little as possible in terms of material assistance. It has shown that this ‘no limits friendship’ is actually a friendship with very profound limitations.”

Questions from our audience

Michael opened up to questions from the audience and Bobo was asked about a range of issues including the impact of economic sanctions, whether NATO will take a greater role, America’s likely involvement, what life will look like when the conflict is over, the effectiveness of the information war, the likelihood that Putin will use nuclear weapons and the effect of the diminishing morale among Russia’s soldiers and inner circle.

In closing, Judy thanked Michael and Bobo for their insightful comments.

We received a number of requests for a video recording of the evening, and hope that you will enjoy listening to the informative conversations by clicking on the image below.

With our warmest regards